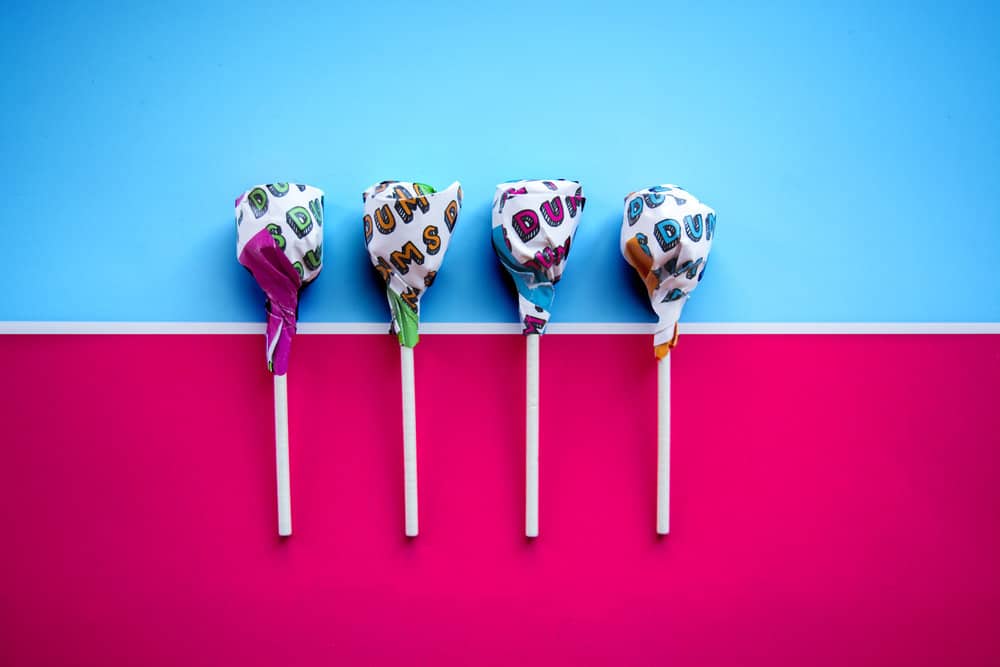 The sweet taste of Dum Dum clams everyone’s soul. It is one of the most favorite candies loved by kids and adults across the globe like Twizzlers, Sour Patch Kids, Lifesavers and many more. It comes in a variety of fruity flavors and bright colors. But, are Dum Dum candies vegan? Let us quickly find out!

If you are following a vegan diet and are equally tempted by your favorite Dum Dum candies, here you go. We have scrutinized several candies like  Pop Tarts, Airheads, Lifesavers, Sour Patch Kids, Starburst and many more for their vegan status. Now, this review will help you to know whether Dum Dums are vegan friendly or not. Go ahead and scroll down to know the ingredients, nutritional aspects, and many more unknown facts about Dum Dum candies.

Dum Dums – Vegan or Not?

What Are Dum Dums? – Originated from Akron Candy Company in Bellevue, Ohio, in 1924, Dum Dum has remained as one of the most popular candies across the globe. It is available in 16 flavors presently, with new flavors rotating often. A fun part everyone knows about this candy is the Mystery Flavor, which is created by mixing the end of one batch with the next batch. It means they do not clean machines in between flavors.

Yes, Dum Dum candies are vegan since they do not contain any animal-derived portions except for some debatable non-vegan ingredients listed below. Though the productions of some of Dum Dum lollipop ingredients are controversial for the vegans, the candy is considered safe for the vegans.

The basic ingredients of Dum Dums include sugar, corn syrup, citric acid, malic acid, salt, artificial flavor, and color added. Though these ingredients are assumed vegan, some of these are still controversial owing to their production process. These are mentioned below.

For those following a strict vegan lifestyle, sugar is a controversial ingredient. The pure white color of refined cane sugar is a result of its processing method, which includes bone char. Though sugar itself doesn’t contain any bone char particles, the production process makes it animal-derived for some ingredients.

Both natural and artificial flavorings can come from animal or plant sources. Usually, the natural flavorings used in candies are sourced from plants. If any product uses flavors from animal-origin, it is highlighted in the label. Since there is no mention of any animal sources in the label, we can assume that Dum Dum candies are vegan-friendly.

However, you should also check the brand before assuming the candies vegan. The products from other brands might not be vegan and you should always check the label to determine it.

Yes, Dum Dums are gluten-free as well. The Allergen Info website states it very clearly that Dum Dums, packaged by the Spangler Candy Company, do not contain wheat or gluten. As you already know the ingredients of Dum Dum candies (we have mentioned above) that are gluten-free, you shouldn’t worry anymore.

Yes, Dum Dums Allergen Info website states the products are dairy-free. They mention that the products are packaged by Spangler Candy Company and do not contain milk or any other dairy product. Hence, we can also consider these candies to be dairy-free and safe for the vegans or those allergic to milk.

Yes, Dum Dums are OU Kosher certified, as mentioned in the Dum Dums Kosher Info website, and marked with the OU symbol on the front of the package.

Yes, Dum Dums are gluten-free, since they don’t contain wheat or gluten.

Yes, Dum Dums do not contain peanuts or tree nuts, which are mentioned in the Dum Dums Allergen Info website.

Based on the above analysis, Dum Dums are vegan as well as dairy-free, gluten-free, peanut-free, and allergen-free candy. Hence, if you were wondering whether to satisfy your sweet tooth cravings with these colorful candies when you are on a vegan diet, the answer should be a yes.

Go ahead and pamper yourself and your kids with the classic Dum Dum candies without any worry. Each Dum Dum Pop has less than 25 calories and no fat, making it a safer option than the other candies. Said that we cannot state that Dum Dums are one of the healthiest candies you can have.

Since Dum Dums vegan candies contain sugar, flavoring, and colors, it is essential not to indulge in them too often. Like any other sweet item containing sugar, portion control is the key to prevent obesity and the oral cavity when it comes to relishing your favorite Dum Dums. You can also have a look at the scrutiny of other candies like Twizzlers, Skittles, Swedish Fish and others in our vegan FAQs section.