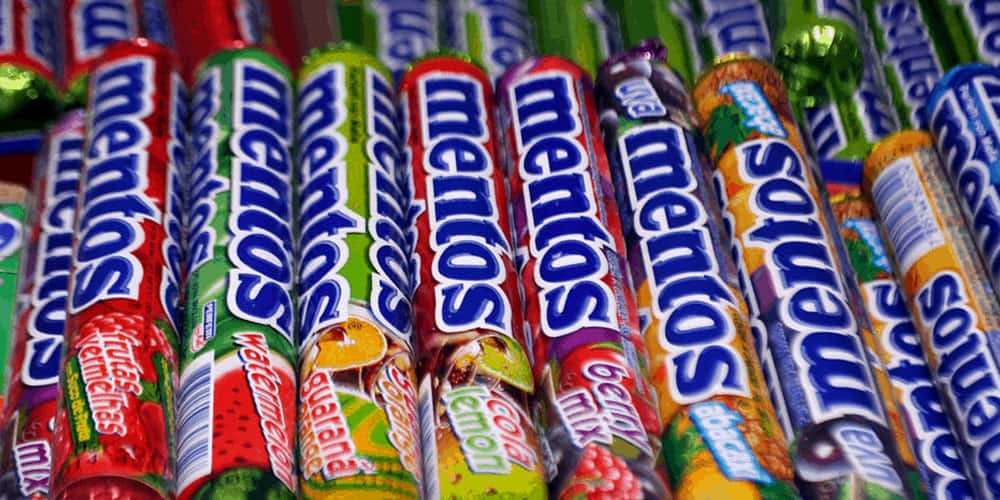 We all love mints. Sometimes we need them to freshen up or to mask the foul aftertaste of food lingering in our mouth. Now, a particular day-to-day food item like mints comes with a lot of confusion around its ingredients. It is very challenging to announce them as a vegan.

Mentos, perhaps the most popular among mints, offer both vegan and non-vegan flavors. But clearly, the number of vegan flavors of Mentos is significantly less.

If you are a vegan and have gone to buy some Mentos, there are 3 main ingredients you need to look for, Carmine, Gelatin, and Beeswax.  None of the ingredients are vegan, so the mentos flavor containing any of these is also not vegan-friendly.

In today’s article, we will talk in detail about the ingredients of Mentos and which of them are vegan.

Mentos are packaged scotch mints sold by Perfetti Van Melle. They were first produced in 1932 and are now sold worldwide.

The shape of the Mentos is unique. They are little oblate spheroids. Each pack consists of 14 mint discs, though the flavor called ‘sour mix’ comes with only 11.

Mentos offers a wide range of flavors to choose from. Its first flavor was sweet liquorice flavor, which is still available in the Netherlands. Some of the flavors are only sold in certain parts of the world, such as the Dalandan Fresh flavor is available in the Philippines, mainly Germany. The flavor called caffeinated Energy was sold, now it is available in the U.S.

Most of the flavors of Mentos are not vegan. But the Mentos hard mints seem to be vegan-friendly. Among the vast range of Mentos flavors, only some are vegan-friendly. Some Mentos gum flavors contain Gelatin, which is an animal-derived ingredient. Certain Mentos mint flavors include beeswax, which also does not fall under the vegan-ingredient category.

Note – if you’re trying to find if vegan sugar is used in the making of Mentos, you will be utterly disappointed. As the ingredients lists of any Mentos’ variant do not declare the sugar to be vegan.

Although Mentos are available in various flavors, mint is probably the best-known one. Mint mentos ingredients are –

So, it can be said that vegan Mentos mints are found in the U.K. But, it is always the best way to check the ingredient list before making a purchase.

The first ingredient is certainly Beeswax. Bees get exploited by harvesting the beeswax and honey. Vegans are always against any animal exploitation, so beeswax is not considered vegan.

On the other hand, we have an ingredient called Carmine. Carmine is a red food coloring agent present in Mentos Fruit, sold both in the U.S. and the U.K. This Carmine is extracted from females of an insect species, mainly found in Central America and Mexico.

The color people get from these beetles is used in food items and many makeup products and skincare items. So, it is not vegan-friendly.

There’s a visible difference in the ingredients of Mentos fruit flavors available in the U.S. and the U.K. Each of them is listed below –

Like Mentos mints, Mentos Spearmint also has the chance of being vegan or not vegan based on your location.

So, it can be distinctly seen that the Mentos Spearmint found in the U.K. are vegan-friendly, unlike the U.S. ones, which contain beeswax.

Most of the flavors of Mentos are not vegan-friendly. These non-vegan flavors are –

Note- some of these flavors can be vegan-friendly according to your location. So, check the ingredient list to find if there’s any beeswax, Carmine, and gelatin.

The few vegan Mentos flavors are-

Candies and gum variants of Mentos are gluten-free.

The Mentos, which contain gelatin or Carmine, are halal.

In this article, we have come to know that quite a few of Mentos’ flavors are vegan. The number was beyond our expectations. It seems like many of the flavors can be both vegan and non-vegan, as some of the same flavors are vegan in the U.K. and not vegan-friendly in the U.S. and vice versa.

So, it would help if you went through the labels attentively to know whether it is a vegan-friendly mint or not.

3 thoughts on “Are Mentos Vegan, Gluten-Free and Halal?”