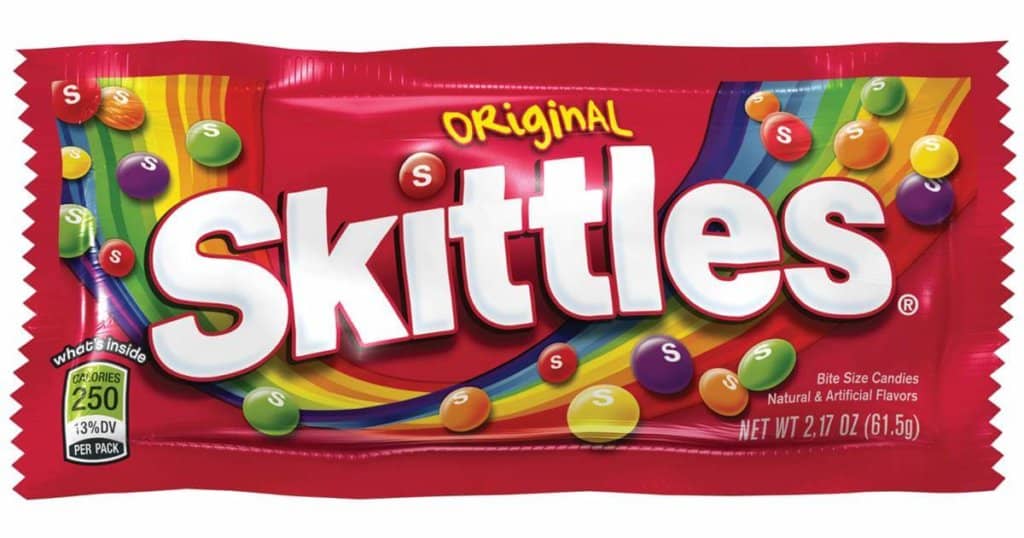 Many of us would relate to the fact that skittles were the best companion during our childhood like the sour patch kids, Dum Dums, etc. They are darn tasty even today and some vegans or those switching to a vegan diet are no doubt concerned about whether or not they should be consuming these colorful sweets anymore. Are skittles vegan? Let’s take a closer look at what goes into this sweet and why the vegan people might be concerned.

Those switching to a vegan lifestyle probably have more trouble than the others when it comes to finding ready-made snacks and candies. A vegan diet is a simple plant-based diet where people are more concerned to avoid animal-derived food items. However, your trouble can be reduced when you know these facts related to your favorite skittles. Like we scrutinized other candies like and many more for its vegan status. We have also reviewed some of the candy brands like Pop Tarts, Dum Dums, Sour Patch Kids, Swedish Fish, Lifesavers, Airheads, Starburst and many more for their vegan status.So now, here we are to explore Skittles.

Whether skittles are vegan or not, do they contribute to our nutrition? Even if they don’t, is there any alarming health factor related to its consumption? Are skittles vegetarian? Let’s find it out.

Skittles are rainbow-colored candies that come in tiny round shapes. Named after the brand, these fruit-flavored candies are originally produced and marketed by the Wrigley Company.

Today, a number of confectioneries all over the world make similar candies in various flavors. Skittle candies come in a wide range of flavors such as tropical, wild berry, dessert, sweet heat, and sour. The taste replicates the flavors they come in, ranging from sweet to tangy or sour.

Yes, Skittles (the current version) are Vegan friendly with no direct animal-derived ingredient being used in the manufacturing process. However there are some debatable ingredients in Skittles that might make strict ethical vegans want to keep their distance with the rainbow-colored candies.

The original recipe of Skittles had gelatin in it, which was used to make the other ingredients in these candies stick together. Gelatin is an animal-derived ingredient, mainly sourced from the bones, cartilage, and skin of domestic cattle, most often cows, pigs, or fish. For this reason, the Skittle was absolutely unsuitable for vegans. However, the rising concern for animal cruelty led the Skittle confectioneries within the U.S. to remove this ingredient back in 2010.

Some ingredients among others make it to the green zone for vegans with no ties to animals or animal cruelty whatsoever. Those are as follows –

Made from corn starch, corn syrup is added to Skittles to inhibit the formation of sugar crystals. It also helps add volume and give a smooth textures to the candies.

Synthetic citric acid is often added to hard candies in order to add tartness, improve flavor and preserve other ingredients. Not being sourced from animals, it is a completely safe ingredient for vegans to consume.

Tapioca dextrin is a starch extracted from Cassava root. It is used in skittles as an adhesive candy coating.

Skittles get their gumminess from this emulsifier. Modified corn starch is made from corn and acts as a gelling agent in candies.

Derived from a plant, carnauba wax is added to skittles to keep the outer coating shiny and keep it from melting. With no ties to animals, this is 100% vegan friendly too.

Though gelatin was removed from Skittles about 10 years ago, there are still some ingredients in these candies that are controversial for vegans.

This umbrella term includes both plant-based and animal-derived ingredients. The manufacturing brand of Skittle doesn’t mention which one they use and therefore, it is again a grey area for vegans.

Also known as E120 or carmine, this was used in Skittles made in the UK up until 2015. This is a typical red dye produced by boiling certain types of scale insects. It is clearly not vegan.

Though palm oil is sourced from plants, the production process is known for animal abuse and unethical work practices.

Some of the Skittles flavors are vegan and non-vegan are listed below.

Skittles Chewies: Launched in the U.S., these are not easily available elsewhere. These candies do not have the outer shell like those of the original Skittles. The main ingredients are sugar, palm fat, artificial colors, flavorings. Though the strict vegans might avoid it, these candies are considered vegan.

Sour Skittles: The ingredients of these Skittles are common to Tropical Skittles. These are sugar, palm kernel oil, natural flavors, and yellow 5 (tartrazine). Though these are controversial for vegans, it’s up to you whether to consider them vegan.

Tropical Skittles: Though this one doesn’t have gelatin or E120, the ingredients sugar, palm kernel oil, natural flavors, and yellow 5 (tartrazine) are still controversial for vegans.

What are the Alternatives to Skittles?

As Skittles are not vegan, you must be looking for alternatives that fit as vegan-friendly and are equally tasty. Find them out with the below list.

There are many brands producing vegan gummy bears. These products are kosher, gluten-free, and low-calorie as well. Within the range, the Surf Sweets Organic Fruity Bear makes a great option for vegans. Check out best vegan gummy bears brands.

This one is a vegan-friendly gum. Containing simple ingredients, this one has appeared on Wrigley’s ‘suitable for vegans’ list.

No, Skittle candies contain E120 red dye, which cannot be claimed to be halal.

Yes, the original Skittle candies contain E120, which is a red dye made of bugs.

Yes, Skittles do come with a shelf life and can expire over time.

No, the original Skittles, Sour, Tropical, and Chewies do not contain gelatin.

No, the original Skittles contain E120, which is a non-vegan ingredient.

Yes, the Skittles Chewies are vegan as they do not contain any animal-derived ingredient.

Now that you know most of the Skittles including the original flavor are not truly vegan, it is up to you whether to consider them edible or not. When it comes to Skittles Chewies, vegans do not have a problem, particularly with this candy. The Tropical and Sour Skittles flavors still can make vegans perplexed.

If you are thinking of avoiding the original Skittles from your diet, you have lots of alternatives mentioned above. Gummy bears, Hubba Bubba, and Cracker Jacks are some great options for vegans. These are quite popular candies, each with a distinct and irresistible taste to try.