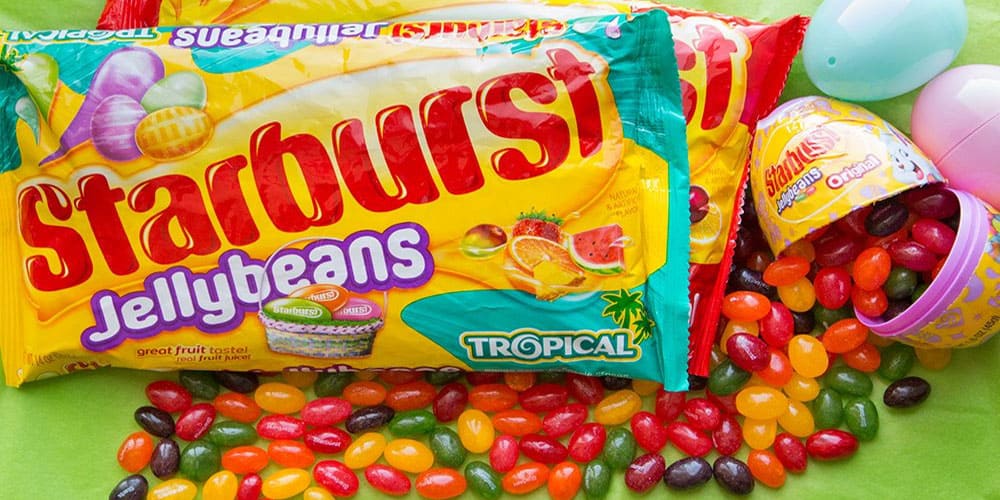 Whether or not you’ve grown up in the West, it can be safely assumed that you must’ve tasted Starburst sometime, someplace. For, these square-shaped fruit-flavored chewy candies are extremely popular all over the world like sour patch kids candies and twizzlers.

People of all age groups are equally crazy about it in any part of the world. This is exactly why vegans are now getting skeptical over the vegan status of their favorite childhood candies they so fondly grew up relishing. Hence, we have evaluated sour patch kids, Licorice candies, Swedish Fish and many more for their vegan status and now, this post intends to answer all your doubts on “Are Starburst Vegan?”.

Starburst is a brand that makes fruit-flavored box-shaped taffy candies. It was originally known as Opal Fruits. These candies are manufactured by a company called The Wrigley Company, a subsidiary of Mars Incorporated.

Starburst comes in various types, such as FaveReds, Sour, Tropical, Superfruit, Watermelon, Very Berry, Summer Blast, and the Original ones. In the Original variety, orange, lemon, cherry, and strawberry flavors are included.

You will find lemon and lime, black currant, strawberry, and orange in the UK’s Original flavor. On the other hand, the tropical flavors are pineapple, strawberry banana, cherry, mango melon, and kiwi.

Mars first introduced this brand in 1960 in the UK under the name of Opal Fruits. Back then, lemon, lime, orange, and strawberry were the original flavors. After some years, Opal Came to the US in 1967.

Opal Fruits’ first variant was released with Sunshine Flavors’ name, but it was being renamed Tropical Opal Fruits after some time. In Europe, both the lemon and lime flavors were combined into one single flavor; lemon-lime and the black currant flavor was introduced. Now that we have given you all the background information on Starburst, we will proceed by answering the question “Are Starburst Vegan”?

Starburst is particularly not a vegan brand, but the UK version of these candies are considered vegan-friendly by many vegans. There lies a question of perception. Many vegans do not consider palm oil and lecithin to be vegan ingredients. Though the UK variant is free from gelatin, it does contain palm fat and lecithin. Lecithin is used as a lubricant that comes from both animal and plant sources, but it’s indistinct which one Starburst use.

Vegans have different points of view regarding some ingredients, so if you do not consider those ingredients as vegan ingredients, then Starburst is not suitable for you certainly.

Starbursts, which are sold in different parts of the world, contain beeswax and gelatin, making them non-vegan and non-vegetarian.

The ingredients in Starburst are quite confusing as there lie great differences. Though in the UK, it is known mainly as vegan candy as it eliminates most of the non-vegan ingredients such as gelatin and beeswax. The starburst ingredient in the UK consists of –

Now, these ingredients don’t instantly speak anything non-vegan, they’re not completely vegan-friendly either. Take sugar for example. Most vegans opine that refined sugar is generally processed with bone char to get the perfect white color. Therefore, they avoid consuming store-bought stuff with sugar in them. Similarly, palm oil fat also doesn’t go down too well with vegans, considering that production of oil involves harm to the environment and animals therein.

But that’s not the only issue with Starburst, unfortunately. A lot of vegans are “ok” with taking sugar or palm oil as well, counting them as vegan products. The real problem is discussed in the following section.

Does Starburst Have Pork? – Starburst is currently manufactured in two different versions – one meant exclusively for sale in the UK and the other, nearly identical variety sold in the USA. Why? Well, here’s the catch! One of them contains a non-vegan ingredient – gelatin. This is what we gathered from the US-sold label of Starburst pack. After all the ingredients listed in the section above, the one at the end mentions gelatin. Interestingly, it’s not mentioned on any of the packs sold in the UK.

Now, gelatin is used in several candies as a binding agent to lend the soft chewy form to the gum. Why is it non-vegan? It’s derived from several body parts of animals, such as the carcasses and skin of pigs. This makes it clear that the company’s manufacturing two different products for two different audiences in the world. And by including a non-vegan ingredient in one of them, well sadly enough, Starburst is out of our vegan list of candies.

That said, there’s one bit of good news though for the US. Vegans in the country can always count on buying their favorite childhood candy 100% vegan from imported candy stores in the US (which import Starburst from the UK) or online stores like Amazon UK. This way, they can happily continue to enjoy their candy guilt-free.

Likewise, there’s a small hitch too. Since some stores in the UK may also be importing the candy from the US to meet deficit in supply, you can never be sure of getting the vegan version. Perhaps it’d be better to always thoroughly check the label before buying Starburst.

Trader Joe’s Scandinavian Swimmers and vegan gummy bears are suitable alternatives to Starburst for vegans. They don’t contain gelatin and are therefore absolutely safe and vegan-friendly. We have compiled a number of vegan gummy brands that have yummy tasting gummy bears.

What are starburst made of to make it a non-vegan candy? But, there is no place to mourn when you have many other vegan-friendly candies available in the market. Some of the best of vegan candies are talked about below –

As the ingredient-list says, there are no possible non-vegan ingredients. However, many vegans are concerned about food coloring additives, such as red 40, yellow 5, 6, and blue 1. So, you need to purchase them if you think that those coloring additives are vegan.

Sour Patch Kids is an age-old name of the delicacy which we have all tasted in our childhood. They are chewy candies with a coating of sugar and sour. They are available in various colors and flavors like orange, redberry, lime, and many more.

You will be glad to know that our childhood favorite Sour Patch Kids are vegan. Its original flavors, including variants like Tropical, watermelon, mango, and berries, are vegan-friendly. Only the Extreme and Xploderz flavors are not vegan.

Skittles are small round-shaped candies that come in various flavors. They are a fruit-flavored candy, but they may look similar to another chocolate candies brand, M&M’s.

Strawberry, lime, grape, and lemon were original flavors of skittles. All of the flavors are completely vegan friendly. So do not hesitate to have them whenever you feel like it. Check Skittles Vegan Status.

Twizzlers are long twisted candies that are very famous for their red color. Twizzlers were first made in 1929, and now they have a huge variety of different colors and flavors to offer you.

Twizzlers are vegan-friendly candies. They do not contain any animal-derived ingredients. So, if you have just known that Starburst is not vegan, you can indeed check out these deliciously long, twisted candies. Check Twizzlers Vegan Status.

Airheads is recognised as a Vegan brand by PETA despite some of its products questionable Vegan ingredients. Ingredients such as added colours and added flavour have been in the Vegan debate for some time. Despite this, PETA has listed Airheads as a vegan brand. After doing our research on the ingredients used, we can say that the Airheads bars are Vegan. Check AirHeads Vegan Status.

So make the switch to these candies until Starburst removes gelatine from its US version. Or, import one from the UK or maybe get it online. There are ways of course if you really want to continue enjoying your highly preferred childhood candy in vegan form. As they say, where there’s a will, there’s always a way.