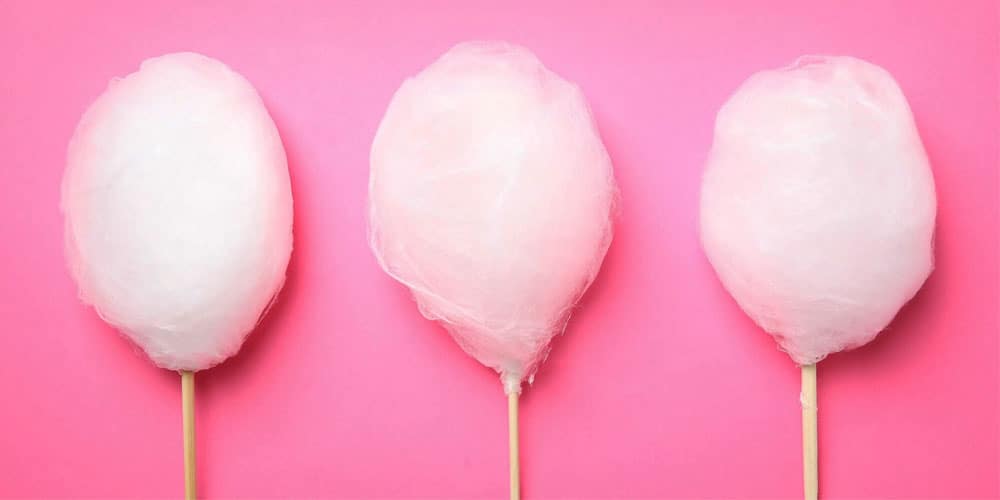 A timeless confectionery that serves in equal parts as a trip down memory lane, as well as the go-to snack for fairs, cotton candy (or cotton floss, or even fairy floss as it’s known as in some parts of the world), remains to be one of the most popular delicacies around the world.

It is as much a delight to see the quickly forming strands of sugar in the cotton candy machine as it is to consume the airy sweetness that dissolves into your mouth the second you take a bite.

However, like most foods, it is a subject of contention for vegans and begs the question of “is cotton candy vegan?” and “can vegans eat candy?” Here, you can read up on cotton candy ingredients and decide whether or not you want to consume cotton candy as a part of your vegan diet.

What is Cotton Candy?

If you’ve never consumed it before and are wondering what is cotton candy, it is a sweet delicacy that is popular worldwide under various names. Cotton Candy is famous for both its consistency as well as its light and sugary taste. This confection is usually found in fairs and is served on either a stick or a cone.

Cotton candy also incorporates flavoring and food coloring that provides it with a varied look and taste. The chief ingredients used in cotton candy are sugar and the aforementioned artificial coloring and flavor.

Unfortunately, there is no distinct answer for whether cotton candy is vegan. While the ingredients used in it may be completely derived from plants (namely, sugar), the processes of deriving these ingredients might not be ethical for the stricter vegan.

More on this in the following sections. Additionally, some food dyes might be derived directly from animal sources, while still others may be tested in animals during the manufacturing process. However, that’s not to say that all cotton candy is non-vegan.

What is Cotton Candy made from?

As mentioned before, cotton candy mainly makes use of three ingredients – sugar, artificial flavoring, and artificial color. However, it is possible to forego the last two and make cotton candy purely from sugar.

Usually made in an automated machine, liquified sugar needs to be spun through tiny holes centrifugally to make cotton candy. During this process, the sugar cools once again and solidifies into the “cotton” consistency that we have come to associate with cotton candy.

Coming to whether is cotton candy gluten-free or not, it more than likely is. Traditional methods of making cotton candy do not utilize gluten in any form since they use refined sugar, which does not make use of gluten.

Most food dyes, as well as food flavoring, are also gluten-free. However, there is a possibility that some may contain gluten, which can be confirmed by contacting the manufacturer directly.

While sugar at first glance may be a completely vegan ingredient, it is the ethical discrepancies in the manufacturing process that vegans concern themselves with. The most popularly used kinds of sugar are either derived from sugarcane or beets.

While sugar extracted from beets come about through a vegan process through completely vegan additives, cane sugar is less vegan in the same respect. Cane sugar makes use of bone char in order to be crystallized efficiently, which, as most vegans know, is made by heating up the bones of cattle till they’re charred black and completely grainy. This bone char is what gives cane sugar the pristine white color that we associate with it.

Lastly, it is a widely known fact that all forms of artificial coloring are tested on animals. While this means that they don’t technically use animal-based substances within them, the manufacturing process still results in large-scale exploitation of animals in laboratories.

Hence, artificial coloring is a much-debated component of food within the vegan community since stricter vegans refuse to consume substances that go through animal testing.

For the production of artificial coloring, animals are locked up in cages prior to the testing process and then force-fed the coloring for experimentation. Other processes include harmful radiation as well as inhalation of toxic fumes for animals.

Cotton candy can indeed be considered kosher. While the ingredients themselves do not contain any semblance of meat or dairy, which is a mandate for kosher food, they may involve animals during the manufacturing process (in case of cane sugar using bone char or the animal testing for artificial coloring).

In case of a nut allergy, cotton candy, in most cases, is completely allergy-free. Cotton candy is majorly free of all eight major food allergens since it contains no milk, dairy, nuts, shellfish, soybean, or other allergen-containing ingredients.

However, it is always best to check the ingredient list thoroughly in case of added flavoring containing any of these allergens.

While cotton candy is traditionally made from refined sugar, it is also possible to use normal, granulated sugar to make cotton candy. However, using other forms of sugar, such as powdered sugar or even crushed candy, will not give you the best results.

Being on a vegan diet in no way entails that you miss out on your favorite delicacies – especially when it comes to delicious confectionaries such as cotton candy or candy floss. However, consuming cotton candy as a vegan is a question of choice.

As you have seen, it is difficult to provide a distinctive answer to whether cotton candy is vegan or not. Stricter vegans may choose not to consume cotton candy and may look for alternatives in vegan cotton candy that have transparent, ethical production methods.

However, it is best to research thoroughly the production processes of the ingredients used in cotton candy in order to make sure.