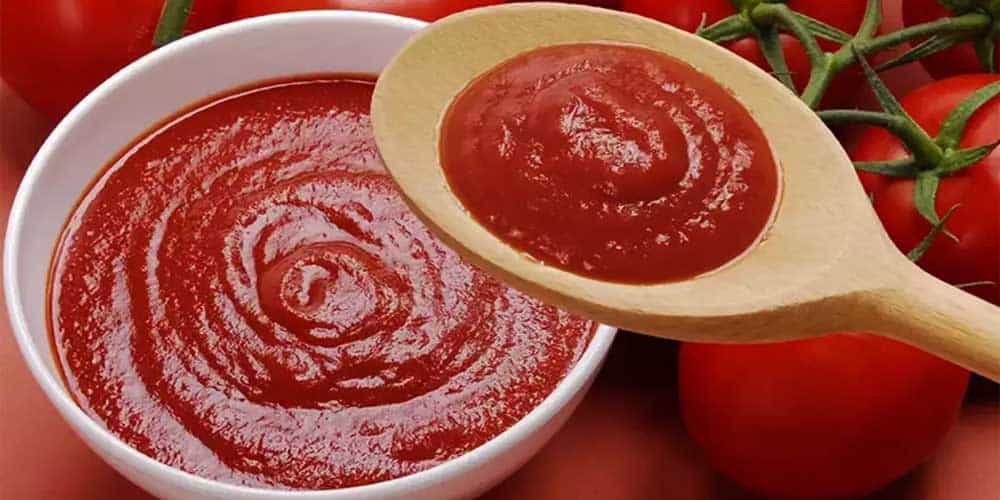 Ketchup – that’s the first thing you ask at a restaurant before you dig into your burger, fries, or even pizza. Ditto for the order at a takeout! You can’t forget the little ketchup packet or your meal isn’t complete. Most of the items with bread requires to have the ketchup with it. If you are a vegan, you must read vegan bread recipe that you can complement with the ketchup.

But, with the entire hullabaloo about food items being vegan or not, we thought why not explore this age-old favorite condiment too. Here, you can read up about the ingredients in ketchup to ascertain “Is Ketchup Vegan” and also we will discuss about different vegan ketchup brands available.

It’s essentially a sauce prepared from tomatoes (of course) and a mix of sugar and vinegar (which gives it the sweet-tangy flavor). It’s one of the oldest and widely enjoyed condiment of all times. Speaking of condiments, this one too found its origins in the land of condiments, China, originating from the Chinese word “ke-tsiap”, which translates to pickled fish sauce.

Yes! Ketchup is vegan by nature because its primary ingredients do not hint at anything non-vegan. Agreed, there may be certain brands which may use different ingredients in ketchup, such as the ones listed in the section below. The key culprit here is possibly refined sugar which most vegans consider as non-vegan component.

What are the Ingredients in Ketchup?

In order to know “is ketchup vegan or not”, we need to take a look at its ingredients:

These ingredients don’t evoke any sort of suspicion at being non-vegan. Although some consider that fructose is non vegan products. But, we have defined it well in this “Is soda vegan” article for you. However, those who follow strict vegan standards may not be happy with the presence of some ingredients which don’t necessarily qualify as vegan.

For instance, white or brown sugar is sometimes used as a sweetener in ketchup. What vegans mind about sugar (even though it’s plant-based) is that its refinement process makes use of bone char. This char is derived from animal bones, particularly those of cattle and helps give sugarcane milky white colour during refinement.

Yes, absolutely vegans can eat ketchup. Sugar is the only ingredient in most vegan ketchup brands that may trip up someone who is following a strict vegan lifestyle. Besides sugar, there are a couple of other ingredients present in vegan ketchup that may make some vegans uncomfortable with its consumption. We’ve already explained above why sugar may not be considered vegan-friendly by some.

To make stuff simpler for you to understand, we’ve broken down each of vegan ketchup’s ingredients into vegan and non-vegan categories so you wouldn’t get confused while buying your favorite vegan tomato sauce brands at the store:

It’s used by several ketchup manufacturers as a common sweetener in place of sugar. This helps save production cost to a large extent. Besides, not using conventional sugar is also a plus point for vegans.

Some brands may mention organic sugar on their ketchup labels in which case, you needn’t fret at all. This is because organic sugar doesn’t use bone char so it’s vegan.

This is a slightly grey area because it isn’t possible to exactly determine the origin of these substances. It remains unclear whether natural flavorings are a derivative of animals or plants.

For this reason, some vegans may prefer to skip a brand that contains them. There may be an addition of flavor enhancers in the natural flavoring like E631. Know whether E631 is vegan or not before having it.

What Ketchup Brands are Vegan?

Apart from Sugar, there’s nothing much in ketchup that should be a cause of worry for vegans. If you still have doubts, you can always check out the following vegan ketchup brands.

A lot of vegans often ask “Is Heinz ketchup vegan?” You should avoid Simply Heinz variation of the brand as it uses non-organic sugar, but Heinz Organic Ketchup is all vegan. Heinz organic ketchup ingredients are free of non-organic sugar which is bone char-filtered.

Yes, Hunt’s Classic Tomato Ketchup is totally vegan, as it is sweetened with high fructose corn syrup, as a vegan sweetener.

Ketchup is naturally dairy-free. You can see by reviewing the ingredients that they do not include any dairy products. If you are buying a newly arrived ketchup brand, you can get rid of any confusions by having a look at the ingredients list.

Another popular ketchup variety in the market is Hunt’s No Salt Added Tomato Paste. Lot of people are now concerned about its gluten-free status, especially those who’re gluten-intolerant. The product label does not mention gluten-free for the ketchup.

The FDA states that the common food allergens present in the ketchup are milk, peanuts, eggs, fish, crustacean shellfish, soy, tree nuts, and wheat. Those who ask about another brand – Is French’s ketchup gluten free – can be happy because it is, at least to less than 20 parts per million.

If you like having some spicy Japanese sauce like Teriyaki sauce, you can read the Teriyaki Sauce vegan status with us and understand whether you would like to have it in your vegan diet or no.

Yes, ketchup is vegan. Tomato ketchup can be enjoyed by vegans guilt-free for it doesn’t contain any animal ingredients outright. However, if refined sugar or natural flavoring is a problem, you can always opt for vegan ketchup brands. You can use this vegan ketchup with your several dishes. You can also prepare vegan lasagna at home with this vegan ketchup.