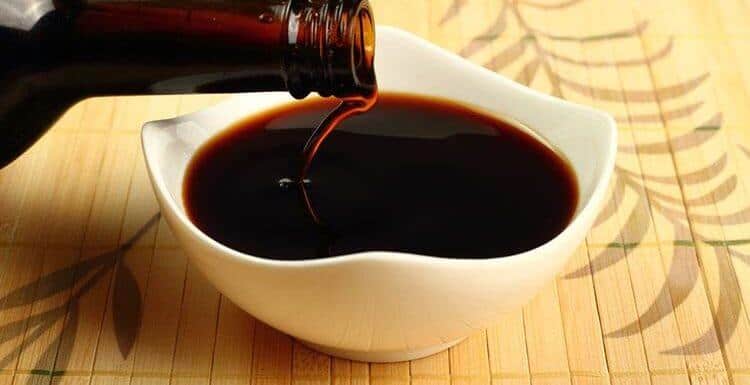 You are here: Home / Vegan FAQs / Is Soy Sauce Vegan?

Soy sauce is a favorite accompaniment with almost all dishes on the table, not just Chinese or Japanese food. You can add soy sauce even in Mexican food like you can add it in vegan Burritos recipe here. This salty, black color sauce has the tendency to lend a unique magical flavor to almost anything it’s added to – either in the kitchen or after the dish is served on the table. But is it really vegan-friendly? Let’s find out whether this salty condiment that we’ve been so fondly adding to our dishes clears the vegan test or not.

Soy Sauce – Vegan or Not?

What is Soy Sauce – Soy sauce was first invented in ancient China sometime during the Western Han dynasty around 2,200 years ago. From China, it first went to East and Southeast Asia and after becoming a staple kitchen condiment there; it soon traveled to other parts of the world in the late 1950s, winning the hearts of many a food connoisseur. Its wide international popularity is largely attributed though to the leading Japanese soy sauce brand, Kikkoman.

Yes! Soy Sauce is vegan as per the ingredients listed below which includes no animal-derived or animal by-products in it. Since, different brands include some additional components to make the sauce more customized, which may not be vegan. So, check the ingredients before you purchase any Soy Sauce brand.

How is Soy Sauce Prepared?

Its preparation process is equally amusing. Soybeans are fermented to make this tasty sauce (soybeans are rich in vitamin B12 and is a plant-based products, so vegans can have it as we have discussed in this why I’m not vegan article) . Interestingly, salt was once considered very costly to afford. This led to the creation of soy sauce and similar salty condiments to elongate the use of this costly mineral in food. But its deep umami flavor was so relished that even years later when salt prices went down, soy sauce continued to be much in demand.

Owing to its immense popularity, several versions of soy sauce came into existence so you can today find so many different variations of this condiment in the supermarket. This wasn’t the case though until a few years ago perhaps. In the West for instance, only three types of soy sauce were available – regular, light, and dark – there wasn’t much choice. And then came the Japanese variations such as Tamari, Koikuchi, and Usukuchi soy sauce. We became spoiled for choice.

What is Soy Sauce Made Of?

Ingredients tells us “is soy vegan friendly” which would help us analyze this condiment. Soy sauce uses the following key ingredients:

A quick look at these four tells us that nothing about them is non-vegan. However, over the last 2,200 years, some variations in ingredients and the preparation process are bound to have taken place. But essentially, soy sauce contains these. Also, the relatively new Japanese version Tamari is made of either no wheat or very little of the grain. Then there are some popular store brands which add caramel colouring and corn syrup to the soy sauce. Some also add preservatives like Potassium Sorbate and Sodium Benzoate.

Taking into account the primary and traditional ingredients used in the preparation of soy sauce, it can be safely derived that soy sauce is indeed vegan. It does not use any animal-derived ingredient or by-product in its preparation nor are there any animals harmed during the process. Besides, the additional preservatives and colorants mentioned above which are added by some brands still make the sauce vegan-friendly.

As mentioned earlier, soy sauce has come a long way since its first invention in China. Different brands may use different things to enhance the soy sauce experience for their customers. One such stuff added by certain brands is lactic acid. You can find it in some soy sauce bottles at the supermarket. So is lactic acid vegan?

It’s the name that creates confusion in the minds of some vegans, leading them to think that lactic acid is connected to lactose, the sugar present in milk. On the contrary, lactic acid is nothing but a kind of bacteria commonly used in the fermentation process of soy sauce. It isn’t a dairy derivative either but obtained from carbohydrates like cornstarch. (As we have earlier discussed about lactic acid in ‘Are Sour Patch Kids vegan‘ on whether it is vegan or not)

Another interesting fact to point out here is that most people get confused over is soy sauce vegetarian? Possible because of the meat- or broth-like taste that soy sauce lends to a dish? They then wonder if it contains fish or similar meat in its preparation. No. The fact is that the deep umami flavors of the soy sauce which are a gift to it through months of fermentation and brewing lend it this rich meaty flavor. But it doesn’t contain any meat or animal by-product by its own.

Though the brand performed animal testing experiments initially, it bowed in to the pressure by PETA and other vegan and animal rights groups and is now completely vegan.

Your safe options to buy at the store –

With all the confusions going on in the head over whether or not you’d be able to pick up a perfect vegan soy sauce at the store, why not make your own at home?

Can vegans eat soy sauce? Absolutely, though doubts may naturally arise since different brands follow practices or use ingredients different from the others. Perhaps check each soy sauce ingredients label or speak directly to the company when in doubt.