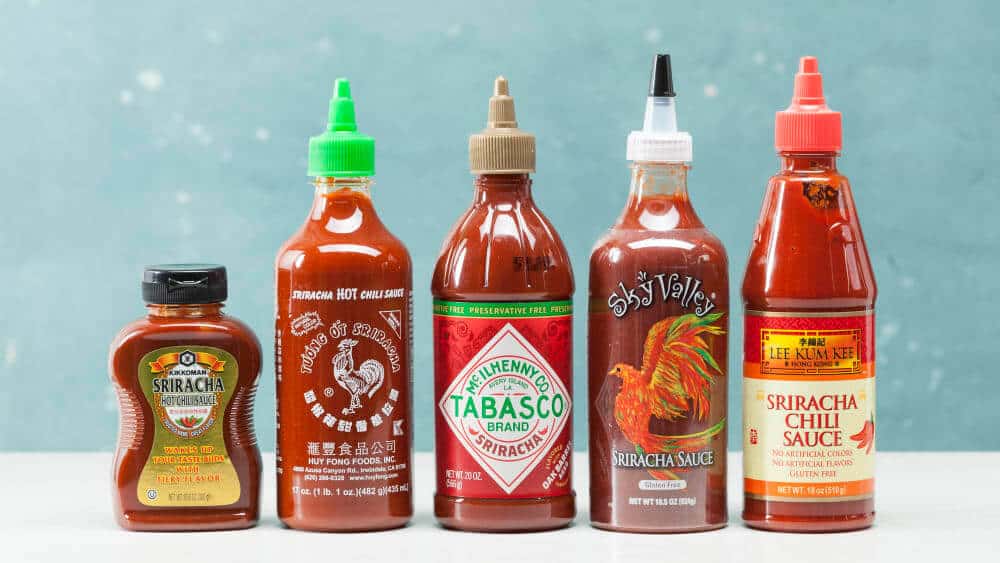 Sauces are a widely preferred accompaniment that go best with almost any kind of dish laid on the table. And there are tons of varieties out there to appease different taste buds too. We have reviewed several condiments like ‘Tomato Ketchup’s vegan status‘ for giving the best vegan experience to our audiences.

One more such condiment that’s become a kind of universal favorite the world over regardless of its accompanying cuisine is Sriracha – a red-colored spicy sauce, a dash of which is enough to turn anything hot and tasty.

Table of Contents show
1 Sriracha – Vegan or Not?
1.1 Is Sriracha Sauce Vegan?
1.1.1 How is Sriracha Made?
1.2 Is Sriracha Healthy?
2 Conclusion

Sriracha – Vegan or Not?

What is Sriracha – Sriracha refers to a chili sauce that’s red in color and unarguably spicy. A lot of people call it the “rooster sauce” too, going by the image of a rooster on the packaging of its famous producer brand – Huy Fong Foods, California. Though the sauce has been attempted by several brands since its first invention, Huy Fong Foods has and still continues to produce the most popular form of Sriracha sauce.

Sriracha is generally a great condiment to add a touch of spice and delectable flavor to a lot of food items, some of them being soups, vegan snacks, noodles, or breakfast dishes like homemade vegan Burrito. The sauce is a unique preparation that blends together different extreme flavors – sweet, spicy and sour!

Yes, Sriracha is vegan! Going by the sauce’s ingredients listed in the section below, there seems to be no problem with calling the sauce vegan. Of course, sugar may be objectionable to some vegans but a majority of vegans don’t seem to explicitly mind it much.

But that could be subjective. If you wish to know if sugar is vegan or not, then you can check this article on ‘Are Frosted Flakes Vegan‘ and then decide to go ahead or not.

Also, in case the xanthan gum is a dairy-derivative, though a rare possibility, most Sriracha brands would clearly indicate it on the label. You just need to check the label before picking a vegan Sriracha brand at the store.

How is Sriracha Made?

Is Sriracha spicy? Oh,you have no idea! To make this red hot chili sauce, a special chili pepper which is a jalapeno-chile hybrid, is blended into a chunky paste. The other ingredients – vinegar, sugar and garlic are then added to the paste along with some preservatives to maintain freshness longer. And the result is a salsa-like sauce that has a unique tangy-hot flavour and a bright red colour owing to the chili pepper seeds that are strewn over the sauce.

With all food items, it’s generally good practice to assess their health value once in a while to know what exactly we’re putting into our body and how good or bad it is for our health. The same holds true for the Sriracha sauce too, particularly since the condiment is so fondly loved in all kinds of cuisines across the world.

Usually, Sriracha is taken as a dish accompaniment. Assuming one serving of the sauce to be one teaspoon, we can say that 1 tsp. of Sriracha sauce generally contains 1 full gm. sugar and approx. 100 mg sodium!

That amounts even higher than ketchup, 1 tsp. of which generally contains 1.2 gm. sugar and only 50 mg sodium. The only positive thing in favor of Sriracha sauce would be that considering its hot and tangy spices, it’d normally be restricted to 1-2 tbsp. at a time, whereas ketchup would be used far more generously.

There’s another ingredient in Sriracha that makes it potentially unhealthy – xanthan gum, a food additive that works as a thickening agent in the sauce. It may be obtained from wheat, corn, or soy – any of the three. For a person who’s allergic to any of these three items could possibly experience similar allergic symptoms on consumption of the sauce too.

Besides, though the occurrence may be rare, xanthan gum can also use lactose as a base for production. If this is the case, it could make the sauce unsuitable for lactose-intolerant or dairy-allergic consumers. Also, preservatives like sulphites used in Sriracha may also cause strong allergic reactions in some people.

Sriracha sauce is safely vegan though not entirely healthy. Like all other condiments, it should be enjoyed in moderation. Check this article on other sauces like ‘Is Soy Sauce Vegan‘ with us.