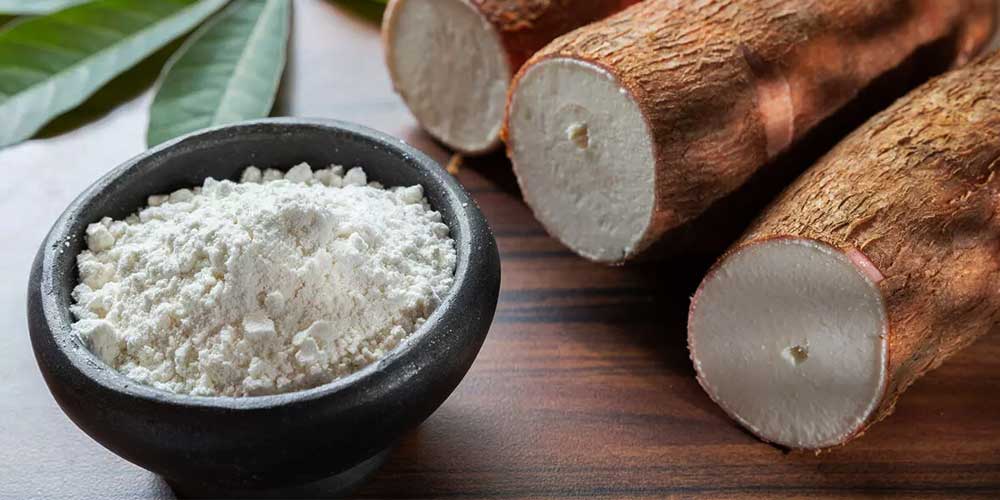 There are few ingredients that can be utilized in cooking as effortlessly as tapioca while being versatile in its usage at the same time. Whether from the chewy and sticky tapioca pearls present in tapioca pudding or the sweet and often multicolored delicacies at the bottom of your bubble tea, using tapioca in food is a lot more common than you might think.

However, in terms of a vegan diet, it often becomes difficult to tell whether a particular substance really is vegan. Here, you can read up about the origins of tapioca and answer the crucial question of “is tapioca vegan?”

Tapioca is a starch that undergoes an extraction process from the roots of the yucca or cassava plant. This plant was previously most commonly found in Brazil but now has roots in Africa and South America.

Since it is a starch derived solely from plants, it is regarded as plant-based in all its forms – whether as powder, flakes, or tapioca balls that are more commonly known as boba. Used as a thickening agent and staple food, tapioca is utilized in the baking process due to its gelatinous properties.

To answer “is tapioca starch vegan” it is essential to look into the origins of the same. Since tapioca is extracted from the roots of a plant, it finds its origins in completely plant-based substances.

What is Tapioca Made Of?

These cassava roots are squeezed till they release a liquid which is collected. This liquid has a starch-like substance sedimenting at the bottom of it, which is tapioca.

Once the liquid has been drained, only the starchy substance remains at the bottom, which is then dried and converted into tapioca powder. Tapioca powder goes on to be formed into various other byproducts such as flour, flakes, and tapioca pearls.

Once again, since tapioca is derived from a process that does not use animals or animal products and is derived from the roots of the cassava plant, it can be considered completely dairy-free, thus answering the question of “is tapioca starch dairy-free.”

On the other hand, the most popular usage of tapioca as tapioca balls in bubble tea might not be dairy-free. In bubble tea (check vegan status), tapioca balls may be prepared with milk or honey, which are definitely not vegan substances.

The composition of tapioca can be modified in order to reduce the levels of insulin in the body. The insulin resistance was significantly lowered in an experiment conducted on diabetic mice once they were given a modified form of tapioca starch. However, more research is required in order to posit this benefit in human bodies.

There are multiple health benefits to including tapioca in one’s diet in various forms. The most notable macronutrient present in tapioca is carbohydrates, which tapioca has an ample amount of.

On the other hand, fats, fibers, and proteins are present in negligible amounts in tapioca. It is thus replete with empty calories without providing substantial amounts of nutrition.

What Tapioca is used for?

As mentioned before, tapioca is generally used as a thickening agent in various forms of cooking and baking. Serving as an excellent gluten-free substitute to wheat flour, tapioca can usually be found in frozen and packaged foods. The presence of tapioca facilitates in the preservation of these foods, such as mixes for soup and pre-prepared meals.

Tapioca is also used as a cooking ingredient in place of wheat flour, combined with non-wheat flour to help bring about a more developed texture. It is even used as a replacement for cornstarch as a thickener.

However, the most popular usages for tapioca are tapioca balls in tapioca pudding as well as in bubble tea. Here, tapioca balls are more commonly known as tapioca pearls and are combined with other ingredients for variations in flavor and texture.

How to use Tapioca in Vegan Cooking?

While tapioca is most often used in vegan processed food, it finds various usages in the vegan kitchen as well in terms of cooking and baking. For instance, being used as a replacement for eggs in a vegan recipe is one of the most popular usages of tapioca owing to its thickening quality.

Most baked goods require eggs, which makes tapioca an excellent replacement for vegans. Additionally, tapioca is an essential component of vegan cheese as well. In vegan mozzarella cheese as well as provolone, tapioca features as one of the main ingredients. It also makes the cheese starchier and, therefore, more textured.

This is one of the most significant benefits of utilizing tapioca in vegan cooking, especially for vegans looking for an ethical replacement to cheese without foregoing the flavor of the same.

Additionally, tapioca finds usage in gluten-free, vegan baked goods such as flatbread; however, checking for the use of eggs in these products is a must for vegans.

Lastly, tapioca pudding, traditionally made from cream and milk as chief ingredients, also has a popular vegan alternative that uses coconut milk instead. Hence, it is easy and often pertinent to use tapioca in vegan cooking of all forms.

While tapioca might be a relatively unknown ingredient and a component in most foods, chances are, most individuals have relished a portion of food that contains tapioca.

Keeping in mind the health benefits of using tapioca in your vegan cooking and baking, it serves as an excellent replacement for most non-vegan thickeners. Using tapioca might just be your new favorite in a vegan kitchen – especially now that you have seen the many uses for tapioca in vegan cooking.

From tapioca starch vegan cheese to act as a replacement for eggs in vegan recipes, there are truly few substances as versatile as tapioca.

1 thought on “Is Tapioca Vegan? Is Tapioca Dairy Free?”