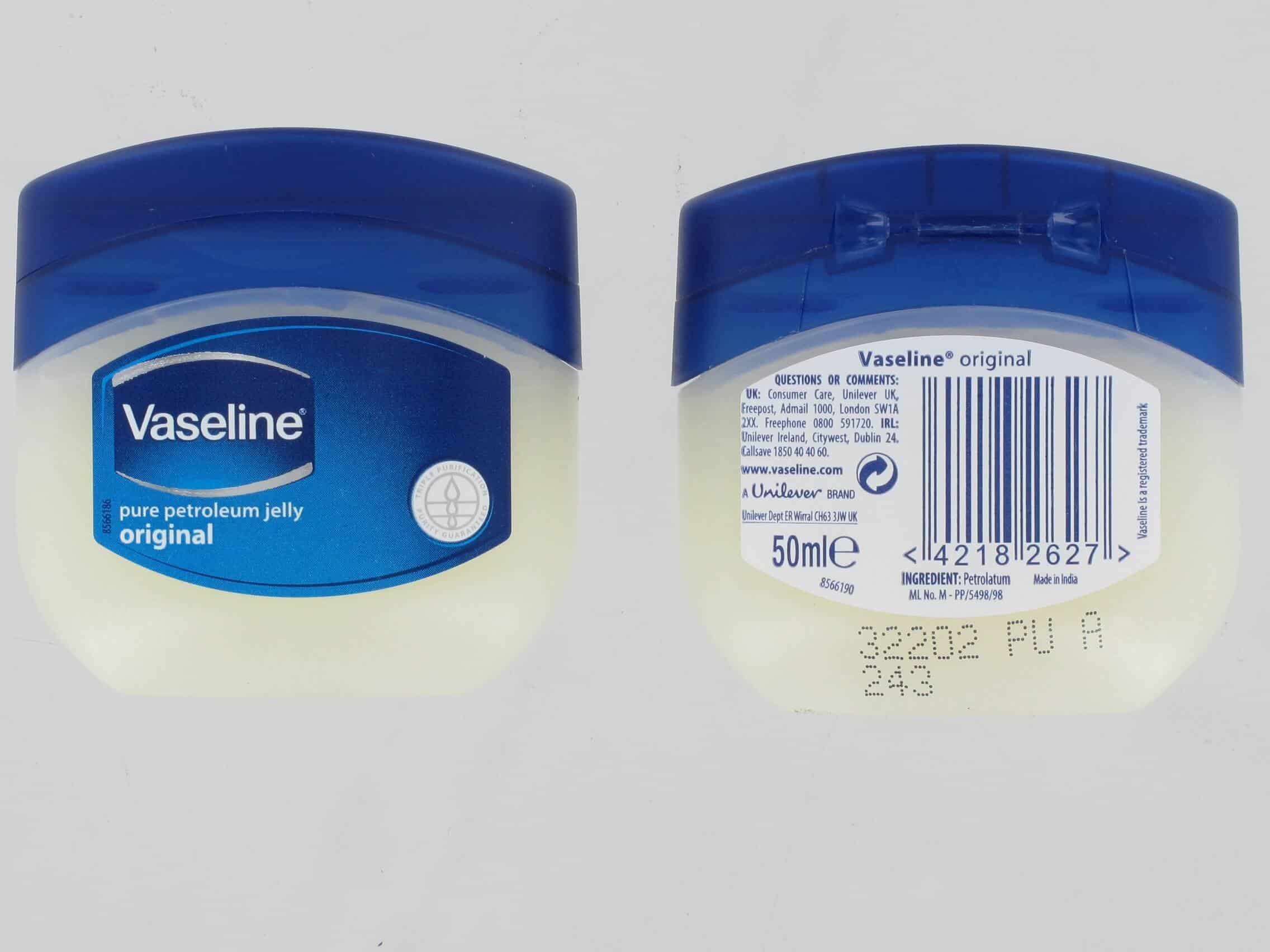 Vaseline – this name has been associated with us since childhood. Chipped or cracked lips in winter or minor scratches on the knee while playing – for everything big or small, we’d keep finding excuses to apply a bit of that sticky-white cream. And now as we’ve grown older, we understand better that some of our favorite childhood creams and ointments come to us after being tested on poor, innocent animals!

And as the concept of veganism gains more popularity, brands like Vaseline too have come under the scanner. Is our beloved Vaseline vegan and a cruelty-free petroleum jelly? Let’s find out together.

What Does Vaseline Contain?

Let’s start with the basic composition of the petroleum jelly Vaseline and take a look at its major ingredients. Well, Vaseline is essentially a formulation of one single ingredient that’s boldly listed on each of its packs – petroleum jelly. Now, is petroleum jelly vegan? We can answer it by understanding its composition – a blend of mineral oils and waxes. This goes on to state that Vaseline in itself does not comprise any animal products or animal-derived product.

Does Vaseline Test on Animals?

Now that we’ve scanned through the ingredients out of the way to determine whether or not using Vaseline can be safely termed as vegan. So let’s move on to the next step involved in identifying a product as vegan – animal testing. This would help us learn if the age-old petroleum jelly can be safely termed cruelty-free.

There is a certain level of ambiguity in this regard primarily because Vaseline is a product of the parent brand Unilever. Now even though Unilever may own a few brands under its umbrella, which conduct test on animals for their products, it might be wrong here to include Vaseline too under that umbrella.

And we can say this because the latter claims that “We do not test our products on animals and are committed to ending test on animals. Occasionally, across our portfolio, some of the ingredients we use have to be tested by our suppliers to comply with legal and regulatory requirements in some markets; and some governments test certain products on animals as part of their regulations.”

This tells us that Vaseline animal testing is not conducted on the brand’s own will; however, some of the countries it’s sold in might be doing so as part of its regulatory procedures.

So does all this go on to mean that Vaseline can be certified as a cruelty-free personal care brand? Well, before we jump the gun, let’s take a look at what the regulatory body, People for the Ethical Treatment of Animals (PETA), has to say about this. PETA has certified 6 of over 40 brands by Unilever as cruelty-free. Unfortunately, Vaseline doesn’t feature in the list.

To understand that further, let’s look at the common criteria required to qualify PETA certification. PETA requires that the brand must not conduct or commission animal testing on any of the following:

Now, as already stated above Vaseline doesn’t conduct animal testing on its own. So the only possible reason for its non-inclusion in PETA’s list can be attributed to the fact that perhaps its suppliers may be conducting so. We also know that Vaseline is sold in China where the product might undergo animal testing because China makes the process mandatory for all the products sold therein. This explains it.

The points describe above do attempt to lend some clarity to the common concern in the minds of many – is Vaseline vegan and cruelty-free? However, there might still be a few who aren’t 100% sure as yet. Until they find some more convincing answers to this dilemma, here are a few next-best alternatives to using Vaseline. For those who’ve grown up using the petroleum jelly as a handy lip balm, below are some brands which are 100% vegan jelly and cruelty-free:

You might also want to try the following skin care products in the vegan and cruelty-free category:

Also, there are several Bare Minerals Brand’s Vegan Products that you can use instead of using Vaseline. If you are beginning to turn vegan, it will be quite difficult at start to change everything in your lifestyle. At VegansFirst, you can find guides to all your queries on veganism.

For food to cosmetics to shoes, you must slowly make the shift. For this, start with beginners guide for grocery purchase and then check different vegan recipes. Later, move ahead with other products like Vegan Makeup and Cosmetics and further. Since Vaseline has been a daily use product and does qualify to the basic composition of veganism, at the start you can stay put with the usage of such products.

It may not be very easy to label Vaseline as vegan or non-vegan; however, it’s a personal choice to stick to the brand or switch to its vegan alternatives. Overall, the brand does look fine to be considered a vegan petroleum jelly.